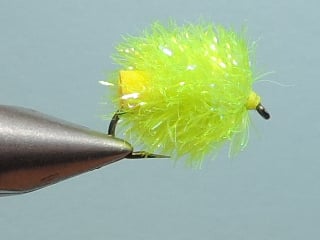 These rather bizarre fly patterns come to us from the reservoir trout fisheries in the U. K. An Internet search of “Blob Fly” will reveal an array of information on tying these patterns, the materials used, how to fish them, and also a lot of controversy—which is not unexpected. Anglers tend to be very opinionated about this type of pattern. Some love them simply because they work so well. Others try hard to find something in nature that Blobs might “imitate.” A few are outraged that anyone would fish with such things and would like to see them outlawed.

Those in the imitation camp like to say Blob Flies resemble a clump of Daphnia, a tiny crustacean that lives in many lakes. In my opinion that’s a bit of a stretch. I think Blobs function as a pure behavioral trigger, much like their cousins the Green Weenie and the Mop Fly. The Blob works because it makes a fish curious enough to mouth it. I have no problem with that. Frankly, I believe that’s why most artificial flies catch fish most of the time.

From what I’ve seen so far, there are three basic versions of this fly. The standard Blob consists of nothing more than a layer of “Jelly Fritz” on a hook. The F. A. B. (Foam-Assed Blob) adds a short bit of foam cylinder at the rear end. You can tie a Blob with a Marabou tail–a weird sort of Woolly Bugger I suppose. Numerous other uses await discovery. This is a material that cries out for experimentation.

There are two basic types of Jelly Fritz, “boosted” and “unboosted.” The unboosted type is composed solely of translucent, plastic-looking fibers that really do resemble jelly when wet. Boosted Jelly Fritz adds much finer fibers near the core, is bulkier, and gives a more solid and somewhat opaque quality. I find the boosted material too bulky on a #8 hook, which is about as large as I’d care to tie these flies.

Since the basic version is so ridiculously easy to tie, here are directions for the F. A. B. Fritz material is hard on scissors, so it’s advisable to use a utility knife or scraper blade when cutting away excess material. If you want to see a video of this pattern, Davie McPhail has one on his You Tube site.

The F. A. B.
Hook: Size 8 standard wet fly
Thread: Davie McPhail uses 8/0. I like 3/0 Danville Monocord, take your pick. Color to match, coordinate, or contrast with body material.
Tail: 3/16” foam parachute post, color as you wish
Body: Jelly Fritz, color as you wish. Use a single color, two colors wound together along the hook shank, or one color on the back end of the body and another on the front.

Although I haven’t yet used this fly extensively, I was quite intrigued when I first saw it and obtained some Fritz material as soon as it became available. There are several companies in Europe and the U. K. selling it. The brand most commonly available on this side of The Pond is from a company called “Frozen North Flyfishing, or FNF.” It’s available from J. Stockard. Note that the FNF “unboosted” version is simply called Jelly Fritz and the “boosted” version is called Slush Jelly.

When first shopping for Jelly Fritz, I was confronted with an array of fascinating colors. It was hard to choose among them. Considering my well-known liking for the Green Weenie, however, it was easy to opt for the fluorescent chartreuse color with the fanciful name “Hulk.” I have seen both a plain and a UV version. The latter includes some UV fibers that flash purple and really pop in sunlight.

I tied several F. A. B’s and tucked them away in one of the fly boxes in my lake fishing tackle bag. I first fished my Blob flies on a springtime trip with my canoe to one of my favorite local lakes. Of course it doesn’t take a lot of effort to find an effective panfish fly for lake fishing at that time of year. However, a chartreuse F. A. B. with a yellow foam tail worked noticeably better than anything else my fishing companion or I tried that day. It was a veritable fish magnet.

Blobs don’t seem as successful in river and stream environments. Maybe there’s something to that Daphnia theory after all. I don’t know, but I plan to continue experimenting with them.